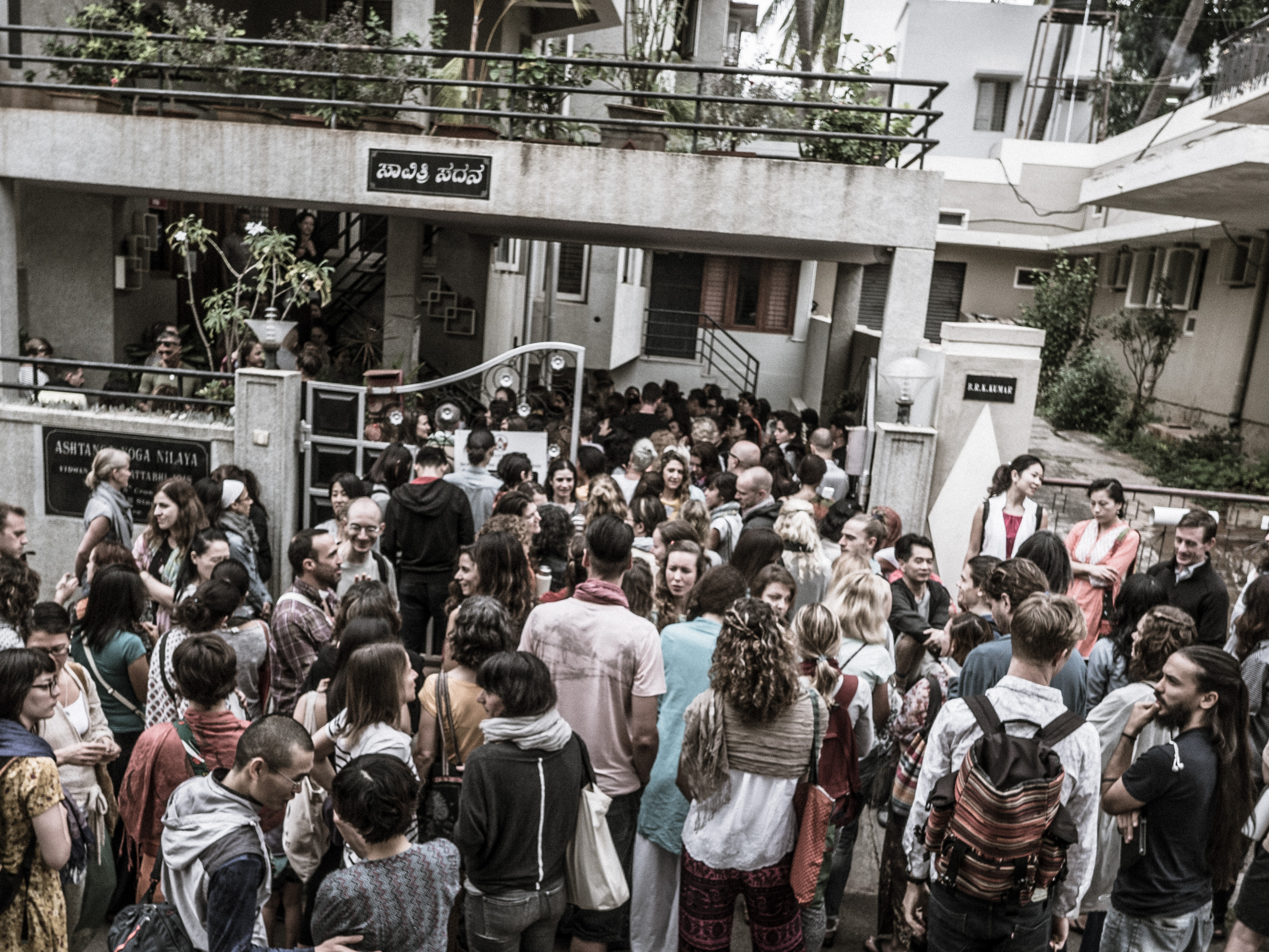 I never liked cliques. They bring out the worst in people. They discourage critical thinking, and they demand allegiance to simplistic ideas. In a word, cliques promote fundamentalism. And for that reason, I never wanted any part of them.

Mysore, I was told, is overrun by a clique. That is, a clique of people who want to align themselves with the presiding power structure to be on the “inside.” They support their leader with an almost religious fervor, and they refuse to learn from anyone else, including the senior teachers of our discipline.

Having heard this story told a hundred times, I had a strained impression of Mysore. But I could see the clique forming on the other side, among the “outsiders” who often called themselves “old-school” and professed to know what Ashtanga Vinyasa was “originally” all about. With my distaste for cliques, I was sure that I did not want to be on either side.

But having never been to Mysore, I tried to keep an open mind. The truth is always richer than what people say. But I was in no hurry to go. It sounded too fraught to be a good place for practice. And I was content to practice in the peace and quiet of the Rocky Mountains, under the guidance of Richard Freeman.

After taking over the Yoga Workshop in 2015, however, I found myself with a new reason to come to Mysore, a reason that was not about me. The reason is solidarity. And by that I mean a sense of togetherness.

Naturally, those who have the anti-Mysore sentiment tend to gather around senior teachers like Richard. So that sentiment can sometimes be strong in Boulder. And as the new director and heir of the Yoga Workshop, I feel some responsibility to stamp out cliquish attitudes whenever they arise. They are no good for yoga.

So I came to Mysore. I came to see what is happening, and be part of it. I came because I believe that, like it or not, these are my people and I am connected to them. I came with an open mind, but I was expecting to encounter the cliquish attitudes that have aroused the anti-Mysore sentiment. Now, having been here for a month, I am pleased to report that all my expectations have been trampled.

The terrible people that I heard about, who throw elbows and scorn people who are working on the Primary Series, never showed their faces. I was never aware of any hierarchy, based on levels of “advancement,” and nobody ever asked me what pose or series I was on. I also somehow missed the notorious aggression with which people are said to practice here. And I never saw any crude or injurious assists.

Instead, I was surrounded by kind, gentle, and sincere people who are here for the love of yoga, and who support and respect one another, without a care for what the other can do. There is a sense of equality that comes from the top down, and shows itself in the way that we all sit on the stairs, waiting to practice together. I also found an inexhaustible spirit of inquiry, which made for some of the best conversations about yoga that I have ever had. People are here to learn, and learning requires critical thought, so everywhere you look, on the street, at the coconut stand, in the cafes, people are critically engaged, and they are talking about yoga.

As for the practice, it could not be better. Yes its hot, crowded, and you have to wait for a long time to get in. But none of this matters at all. There is so much tapas here, so much focus and energy. You can lose yourself in it. No matter which series you are practicing, it stirs you down to the depths. And Sharath’s teaching style is quite hands-off. The emphasis is on allowing the process to unfold naturally, in good time, without unnecessary intervention . . . just like back home.

I will always be a student of Richard Freeman. He has taught me things that have changed me forever, and I know that I have only been given a taste of what he has to offer. I strive endlessly to make myself worthy of the further things that he might teach. But Richard is not my only teacher, nor does he want to be. He encourages all of his students to go out and learn from others. Yoga is vast, he tells us, and you will only limit yourself if you try to learn from one person alone.

Sharath, on the other hand, often insists on the importance of studying with just one teacher, and for that reason, I was almost expecting there to be some tension about my background. Sharath acknowledged when I arrived that he knows who I am. “Oh you’re the one” he said, “taking over Richard’s shala.” But he smiled and there was no tension at all. On the contrary, he made it clear that he respects Richard, and he is glad to have me practicing here under him. It warmed my heart.

Though Richard and Sharath have very different approaches to teaching, I don’t see any substantive differences of the method they teach. What they are teaching is the same, Ashtanga Vinyasa as they learned it from their teacher, Sri K. Pattabhi Jois. I have practiced my asanas here as I learned them from Richard – same wide stance, same reaching arms, same slow pace, same attention to alignment, and Sharath’s response has been nothing but affirmative. Maybe some of the postures and movements do not look exactly like those of Sharath’s other students, but the essence is there. And that seems to be what Sharath cares about.

I am overwhelmed with gratitude for the opportunity to be a student to both Richard and Sharath. Arguably, these are the two best teachers in the Ashtanga world. And I am sure that I did nothing to deserve their attention. Second, I am impressed by the sense of community here in Mysore. It reinforces my conviction in the potency of this practice.

My concerns about cliquish attitudes have all been washed away, and I smile gently at myself for having born them at all. Instead of finding cliquish attitudes, I have found attitudes of humility, contentment, kindness and compassion, all signs that the practice is working.

My wish for the Ashtanga community is that we can continue to practice together, learn together, and grow wiser together, without imposing on ourselves any further delusions of division. There is no need to pretend that we are divided into “insiders” and “outsiders,” or into “old school” and “new school.” There is no inside or outside. There is only truth. Whatever our diverse backgrounds might be, we are all looking for the same truth, and if we sustain an abiding sense of our togetherness, we will be that much closer to its realization.