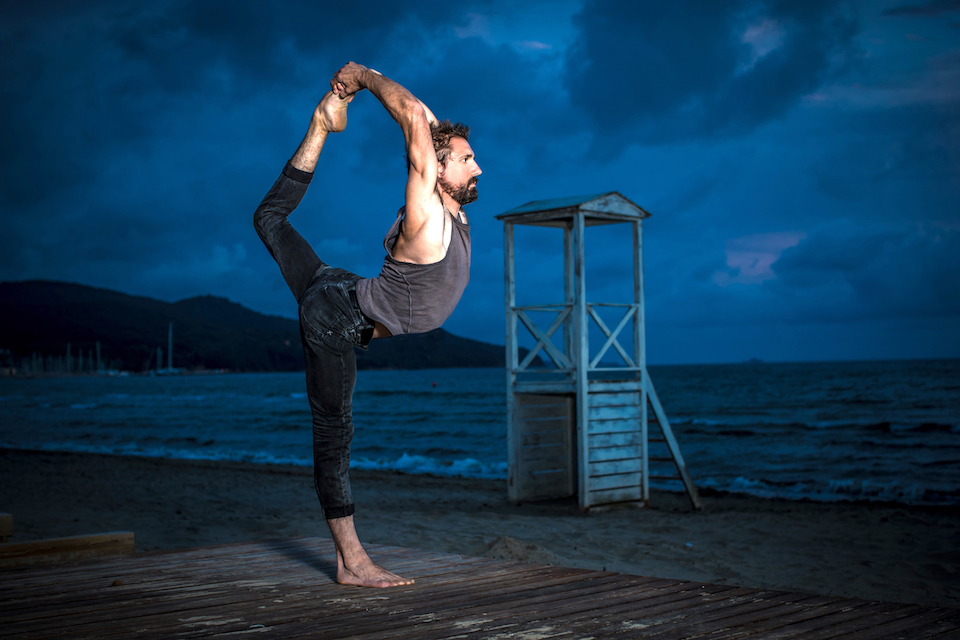 Social media can lend the impression that yoga is a performative art. And there is no question that what appears on social media is precisely that. When supple people take pictures of themselves striking impressive postures in spectacular places, they are engaged in an iconoclastic and decidedly modern aesthetic performance. The resulting images inspire fascination for the human body and astonishment at how it can contort, defying traditional standards of physical beauty, but playing upon our inherent sense of line, symmetry, balance and form.

More than that, the images in question contribute to a larger conversation about the meaning of embodiment, a conversation in which we are all engaged, whether we realize that or not. These images—like yoga postures themselves—are symbols of something that we long to touch, something from which we are profoundly estranged and dream to rediscover on the edges of the world. They remind us that we all embody this enigmatic something, though we reach for it endlessly.

This is one of the strange realities of the human condition: we find it difficult to touch the things that lie closest to us, even as they pulse and ripple beneath the surface of our skin.

The dark side of any performative art is narcissism. And with the ubiquity of social media, narcissistic forces are more pervasive now than ever. Social media places within our hands the power of shaping our public images, through carefully crafted words and imagery. With the mass dispensation of that power, there has been a curious shift in how we locate our sense of self. As ever before, we see ourselves as others see us. But we now have the power to manipulate how others see us, with the carefully curated snapshots that we give them of our lives.

This shift affects all of us, no matter how active we are on social media, for it creates a situation in which we look to social media to form our impressions of one another, and even if we resist, non-participation has a certain meaning that informs that impression anyway, suggesting an alliance with the inherent opacity of the human mind. Social media has adopted a strongly confessional character, which can make those of us with introverted sensibilities squirm with unease. Those candid snapshots of other lives can flush us with embarrassment.

The confessional character of social media creates an illusion of transparency that seems to collapse the scaffolding of personality upon which the psyche rests, raising up and exposing things that many of us would prefer to keep hidden, whether because they are too shameful, too frivolous, or too sacred to be exposed to the public eye.

Social media can badly distort our impressions of one another, by creating an utterly false sense of transparency. But at the same time, it is undeniable that social media is an open window into our collective consciousness. What flows through its loud and roaring channels is a remarkably lucent and revealing reflection of the hidden forces that shape the collective mind. The narcissism that we find on social media is our narcissism. The vanity that we see is our vanity. Everything that appears in the window exposes us, by showing us what lies at the bottom of the psychical well.

And everything depends on how we react to what arises. If we react with scorn and resentment to the vanity of others, then scorn and resentment is what we become. In the moment that we embody those sharp and prickly emotions, we allow them to define us. And we give them more potency each time, by reflecting the images of our scornful and resentful faces back down into the collective psychical well, and their images then shimmer across the mirror of social media. Their currents then run more swiftly underground, picking up force, and threatening to find a fissure through which to erupt.

If on the other hand we take these images with softness and loving attention, then we release some of the pressure behind our reactive tendencies. That is, we release some of the pressure of the ego, which inclines us to react with resentment and scorn to things that threaten the sanctity and solidity of our own identifications. When images of yoga appear on social media, these threats can be quite strong—especially for those of us who have a marked distaste for the extroversion of yoga into images of contortion. The ego that identifies with the “real yoga” is anxious to separate that strained and stilted conception from whatever it supposedly is not, and it becomes quite inflamed when social media begins to blurs the lines between the contemplative practice of yoga and social performance art.

But the real yoga is always in the present moment. And when we are inflamed by what we see as an adulteration or perversion of something that we hold dear, and we are consequently compelled to heap scorn upon other seekers on the path, we have lost the thread. Not that yoga demands that we live without without discernment—on the contrary, discernment is one of the vehicles by which we evolve. But as long as we are encased by prickly emotions, we cannot have the kind of clarity upon which discernment depends. These emotions distort our impressions of reality, so that we cannot appreciate the real intelligence and wonder of whatever might be appearing. In the shadows of these emotions, we can miss the traces of the sublime that are passing right before our eyes. And these traces can be anywhere, even in the channels of social media.

There is something inside of each of us that naturally seeks release. And though it can be obscured by the incessant posturing of the ego, only the ego can bring it to light. The ego is maya, the veil of illusion that is the phenomenal world. That world creates the abiding appearance that we are all separate and isolated. The ego sustains the appearance of that world, by imbuing each person with an abiding sense of self importance. And narcissism is just one way of coping with that isolation, by taking the cultivation of the ego to an extreme.

So maya is the illusion that isolates us, by compelling us to identify too closely with the ego. But maya is also the mirror in which we see ourselves, and become aware of ourselves as we actually are. As the power of creation, maya brings our subtle essence into embodied form. It is the effulgence of nature that allows us to become aware of ourselves, by giving us objects of experience. Without maya, there would be no thought, no sensation, no intimacy. There would be nothing but that pure and abyssal emptiness out of which the world unfolds. So maya is not only the veil of natural illusion, the veil that hides our true nature, but the power of consciousness to appear to itself, and to become aware of itself, as the emptiness that supports the world of form.

The yoga of relationship begins when we appreciate the double nature of maya, the way that maya functions to conceal and to reveal at the same time. It begins when we surrender our reactive impulses toward other human beings, suspend our preconceptions about who they are, and allow them to overwhelm us with their excesses and absurdities, especially when those seem to pose some threat to our own isolating and probably somewhat narcissistic sense of ourselves. The practice is to make space for them, even as they offend our aesthetic and philosophical sensibilities, until they begin to spill over the boundaries of our concepts, breaking through the narrow confines of our judgments about their superficiality, and showing themselves in their absolute uniqueness.

The inviolable dignity of human beings owes to the fact that each one of us refracts the light of consciousness in some totally unique way, and contributes something singular to the sublime unfolding of our collective self awareness. However imperfect our searches might be, each one of us is animated by the same desire to experience complete release from the trammels of our conditioning, the desire to overcome our inveterate sense of isolation, and to revel in the loving essence of our humanity. Seeing others in this way, as being animated, however imperfectly, by this same desire for release, comes naturally with the unfolding of clarity.

When we surrender our defenses, and give up the impulse to protest against those who remind us what we would rather limit and suppress, the posturing that we find on social media, though highly performative, and rarely capturing any moment of actual psychical transformation, appears nonetheless to be an extension of what “authentic” and “traditional” yoga must be for nearly every one of us anyway—a searching and mostly fumbling ritualization of our longing for lucid and loving connection with other human beings. The currents of narcissism and vanity will continue to run through our social media streams, simply because they are part of the mental function that creates our humanity. But if we look with open eyes, we can find more than vanity and narcissism as such. We can an extraordinary celebration of the body, one that recognizes and honors the body as a medium of illumination, and aspires with trembling passion to uncover its secrets, and to touch its essence intimately.

When we come to this way of seeing, we may realize that the maya of social media is highly revelatory, and what it reveals is as beautiful as the inner reeling of the human mind itself. The real illusion of social media—the real misconception—is that because of our pervasive vanity and our untamable desire for recognition, the ego has somehow occluded the light of consciousness from the stream, and now prevents it from shining forth. The light of consciousness cannot be occluded. Even when narcissism takes the stage, it exposes the depth of our longing for connection, and a brilliant light shines out from the screen.